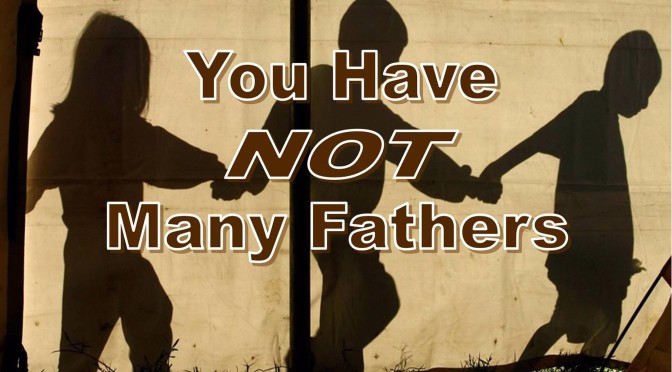 What does it mean to be a spiritual father? Paul told the church in Corinth they may have thousands of teachers but they have not many fathers (1 Corinthians 4:15). There are many keys and factors that go into a person being a spiritual father in someone’s life, but for today I want to zero in on one important aspect of this key relationship.

A spiritual father does not look at the condition of the people who come to him; he sees their potential and leads them in a way that draws that potential out of them.

I am going to use David as our biblical example for this key component of drawing out potential in spiritual sons. Look at this account:

These men desperately needed someone to help them, but the only way anyone could describe them was in ways and with words that seem hopeless. These men were not in a positive position in life and they were likely struggling to find anywhere they could fit in or be accepted. I cannot help but wonder if David was their last option, their last hope of finding anyone who could see past their condition. Not only did David see past their condition of seeming hopelessness, he brought out of them greatness and victory.

Over the course of time David and his men brought great victory to many against the hands of the Philistines. He invested in the lives of these four hundred and turned them into mighty warriors. It is quite likely that most if not all of those referred to as David’s mighty men (2 Samuel 23) came from this group of men. These men did great exploits, and it is due to the fact that they had a spiritual father who was able to see in them and bring out of them potential for kingdom greatness.

The point is never where you are or where you start; the point is how you finish. A spiritual father in your life is going to be a person who can see the finish for you and help you to properly navigate toward that goal. And his doing so will not be with his own motive or agenda in mind, but so that you can maximize your potential for greatness and overcome all of the previous conditions of defeat. When David met these men they were in debt, in distress, and discontented. As David fathered them, however, they became victorious warriors walking in the security of their true identity. Again I say,

A spiritual father does not look at the condition of the people who come to him; he sees their potential and leads them in a way that draws that potential out of them.

The heart of the Father in Heaven sees where He is taking you; and He gives us spiritual fathers on earth to see us with His eyes. My prayer is that each of us will be blessed to have a spiritual father see in and draw out of us all of the Kingdom potential our Heavenly Father has deposited in our lives. It is time to step out of the false conditions and into our true position.