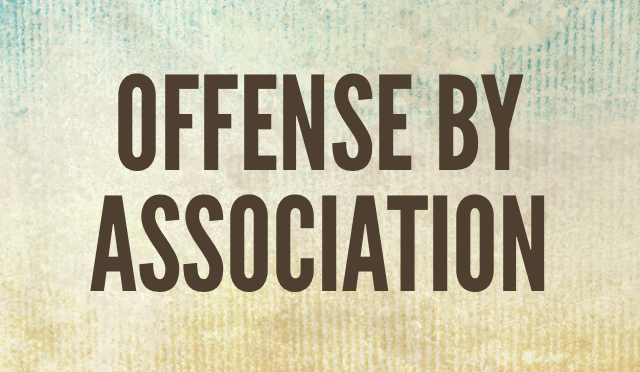 Recently the Lord began to speak to me about how many people are being destroyed by offense. This is not a new revelation in terms of the overall battle with offense, but what the Lord has been dealing with me about is offense in a way I had not noticed before. Simply put, the Lord spoke this statement to my heart on a recent Saturday morning:

“Many are being destroyed by offense by association.”

That statement had my attention, and it led me to explore this concept scripturally. I immediately sensed the Lord lead me to Numbers 12 and the story of Miriam and Aaron speaking out against Moses and trying to solidify themselves as ones used by God. I want to pick it up in verse 9:

And the anger of the Lord burned against them, and He set out. When the cloud went away from over the tabernacle, Miriam became leprous as snow, and Aaron turned toward Miriam and saw that she was leprous. Aaron said to Moses, “Alas, my lord, do not lay the sin on us, which we have done foolishly, and which we have sinned. Do not let her be as dead, who when he goes out of his mother’s womb half his flesh is eaten.” Numbers 12:9-12

Miriam became leprous yet Aaron took on her offense. His association with her caused him to take her offense upon himself; he was not leprous, but he cried out as though he was. What Aaron did, however, is important. He immediately took that offense and cried out for Miriam’s deliverance and healing. Consider that he could have become angry and bitter, pulling Miriam off to the side and consoling her; he could have taken it upon himself to fix what ailed his sister. What Aaron did, however, was to properly bear the burden of his sister instead of improperly carrying her burden.

Let me take this a step further from Galatians 6.

Brothers, if a man is caught in any transgression, you who are spiritual should restore such a one in the spirit of meekness, watching yourselves, lest you also be tempted. Bear one another’s burdens, and so fulfill the law of Christ. For is someone thinks himself to be something when he is nothing, he deceives himself. But let each one examine his own work, and then he will have rejoicing in himself alone, and not in another. For each on shall bear his own burden. Galatians 6:1-4

Paul gives valuable insight into how we can avoid becoming offended by association. First, he encourages us to be willing to “restore such a one,” but as we do so we are to “watch yourselves, let you also be tempted.” The challenge is not in whether or not we should come to the aid of one who has been burdened or offended; the caution is to do so in the proper way as to “fulfill the law of Christ.”

Within the context of these scriptures we find three statements of focus from which we can learn how to avoid offense by association.

This call to bear one another’s burdens has been misinterpreted and misused by many people in many ways – myself often included. It does not mean to come alongside someone who is burdened or offended and walk with them through their pain. Neither does it mean to simply sympathize with someone for what they are facing in life. It also does not mean to take upon oneself what someone else is burdened with and carrying.

The word “burdens” means heaviness, weight, or trouble. The root of this word speaks of the notion of going down or being weighed down. It is that which suppresses and even reduces the one carrying the weight. I have often said that the primary work of the enemy in the life of someone is to weigh down or suppress them while God works to raise or to lift up. In Numbers 12 when Miriam became leprous, she was burdened or weighed down with that disease. In life we often meet people who are burdened or weighed down by various issues and ailments; things brought on by circumstances or Satan designed to suppress and steal away their life and vitality.

We are implored by God to bear one another’s burdens, but it does not mean that we are to take those things upon ourselves or to try and help the other one carry the load. The phrase “bear” or “bear ye” means to bear away or to carry off. The implication is not for me to come alongside and to help someone carry the offense or that which is suppressing them; rather it calls for me to help see that load removed from them. I am not called to take it upon myself, but to stand with my brother or sister in Christ and see that the burden is removed completely and they are free from that which is weighing them down.

In other words, to bear someone’s burdens means that nobody is weighed down by it any longer. I do not walk with them to help them carry the load, and I do not take the load upon myself in an effort to be a friend. What happens is that burden is removed and we both walk together in freedom!

“But let each one examine his own work.”

This is a critical point. Paul says this right after warning about someone thinking he is something when he is nothing. This often becomes the greatest barrier to truly bearing one another’s burdens in the proper way – the misplaced value on one’s own ability and work. If I believe I am something important, and I begin to assume that I am responsible for delivering someone else from their burdens, then I will not properly bear those burdens as discussed above. Instead I will take upon myself a savior complex and feel compelled to be a person’s source instead of being God’s resource.

When Miriam became leprous Aaron cried out to Moses for him to do something. Moses immediately responded by crying out to God:

Moses did not see himself as the source for Miriam’s deliverance, but he immediately went to the source. As we encounter more burdened and offended people the challenge is going to be to avoid a need to be their savior; to understand that we are called to properly bear their burdens away from them and that only Christ can truly provide their healing and deliverance.

“For each one shall bear his own burden.”

This is what ties this all together. The word “burden” used here is not the same Greek word as “burdens” we explored before. This word speaks of a burden or load that is laid on one by Christ. This immediately brings to mind Christ’s powerful teaching in Matthew 11:

Come to Me, all you who labor and are heavily burdened, and I will give you rest. Take My yoke upon you, and learn from Me. For I am meek and lowly in heart, and you will find rest for your souls. For My yoke is easy, and My burden is light. Matthew 11:28-30

Each one is to bear the burden of Christ and not the burden of circumstances or satanic attack. The burden of Christ is light; it is completely opposite of the burdens spoken of in Galatians 6 that weigh down and suppress. Jesus says for those who are heavily burdened or laden to come to Him. The word “laden” means to load one with a burden of rites and unwarranted precepts. Jesus made this declaration with the understanding that many are carrying things they were never intended to carry.

Much of what people are carrying today is a combination of their own unwarranted precepts and the taking upon themselves the burdens and the offenses of others. Offense by association is destroying many. When I am truly bearing my own burden I will be able to properly bear another’s burdens. That will happen because I will realize that neither of us needs to carry that which weighs down, suppresses, and destroys. The burden of Jesus Christ is light because He is the one carrying the weight.

God cautioned me many years ago to pay attention to the weight of what I feel. He cautioned me to recognize that when something is overwhelming to me it is not of or from Him. In ministry it can be so easy to try and help others with their loads when that is far from the biblical mandate we have been given. It is not a carrying with but a carrying away unto Christ. Take note of Miriam’s own deliverance from leprosy:

Miriam was shut out from the camp seven days, and the people did not set out until Miriam was brought in again. Numbers 12:15

The people did not carry her leprosy with them; they saw that the leprosy was carried away from her and then together they moved forward. They chose to not walk in offense by association but rather to walk together in freedom. That is the great call to us today; to properly bear one another’s burdens and to walk together in freedom and life, with Christ doing the heavy lifting. Do not be weighed down by your burdens or those of others, but be free together in Christ.