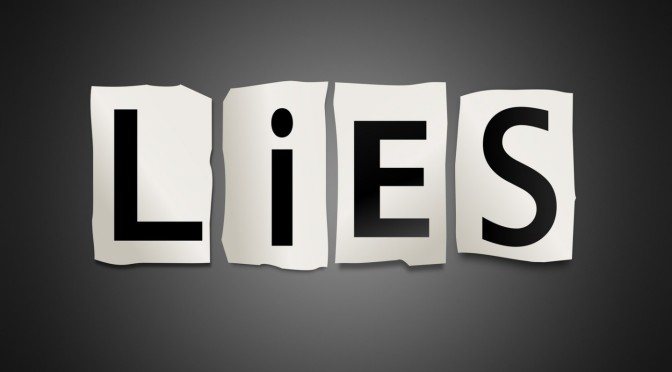 Jesus made a startling declaration to those gathered around Him in John 8 as they were trying to declare themselves to be the descendants of Abraham. They were staking claim to the inheritance of God, but Christ boldly declared their true identity.

You belong to your father, the devil, and you want to carry out your father’s desire. He was a murderer from the beginning, not holding to the truth, for there is no truth in him. When he lies, he speaks his native language, for he is a liar and the father of lies.
John 8:44

In his letter (1 John) the Apostle John expounds upon six lies that are destroying the church, destroying the identity of our inheritance. These lies are believed by those who have assumed an inheritance they simply do not possess.

Lie #1: Those who claim to have fellowship with God yet are walking in darkness.

If we claim to have fellowship with him yet walk in the darkness, we lie and do not live by the truth. 1 John 1:6

This lie is born out of religion, but will lack true relationship and fellowship with God. An individual may be able to fool those around them, but not the One who looks at the heart. Jesus Himself declared that many will say “Lord, Lord,” but Jesus will say that He never knew them.

God is not a perfect balance of light and darkness; He is completely light and good at all times. Those who claim to have fellowship with Him will walk in His light at all times. We cannot claim fellowship with Him while trying to balance the light and darkness in our lives. Darkness that is only occasionally exposed to the light will return to its true nature. We must remain in the Light.

Lie #2: Those who claim to be without sin – have not the capacity for it.

If we claim to be without sin, we deceive ourselves and the truth is not in us. 1 John 1:8

This lie is born out of the belief that one is above the capacity or nature to sin. This one feels as though he is above sin and cannot possibly get caught up in it. This lie will justify sin by calling it our nature. We have replaced the sin nature with the thought of human nature and falsely assumed and believed it was not a big deal.

The word “sin” here is used in the noun form and not as a verb. This is not speaking of action but of nature. John is likely combatting those who contend that actions or sins are a result of nurture or surroundings and therefore not to be the responsibility of the person. In truth, however, sin is more a principle of human nature than of human action. In Christ I am no longer a sinner, but to be poor in spirit is to recognize the capacity for sin within me and therefore continue in His truth to empower me to live free of the action of sin.

Lie #3: Those who claim to have not sinned.

If we claim we have not sinned, we make him out to be a liar and his word has no place in our lives. 1 John 1:10

This lie is born out of the belief of being good enough and having done nothing deserving of punishment or hell. By the very nature of this lie, we show that we feel the cross to be unnecessary and God to be a complete liar.

If we do not recognize the sin nature, the capacity for sin in which we have been shapen, we will discount the need for true repentance. If I genuinely believe I have not sinned I will see no need for repentance, and therefore nullify the possibility of forgiveness for my sin.

Lie #4: Those who claim to know Him, yet they disobey Him.

In John’s day there were antinomian teachers who taught that forsaking a life of sin was optional for the believer in Christ. They taught that one can legitimately claim to “know” God in a saving relationship and at the same time be indifferent to God’s will and His commands, and disobey them. The attempt to be justified through faith in Christ without a commitment to follow Christ is doomed to fail. Our love for God is made complete as we obey His Word. We cannot operate as believers outwardly if we do not allow His Word to first transform us inwardly.

Lie #5: Those who claim to be in the light and love God but hate their brother/sister.

Anyone who claims to be in the light but hates his brother is still in the darkness. 1 John 2:9

This lie is born out of the belief that my salvation is personal and I can deal with or view others in any way I desire. For those with hatred or ill feelings in their heart toward another person, the love of God cannot dwell in the same heart. All hatred or ill feelings toward another can be traced to hurt and unforgiveness. God has told us that if we are unable to forgive others, we will ourselves not be forgiven.

If we claim to be in the light yet we hate our brother then it is clear that we are still in the darkness. When the true light is already shining it will overflow as love toward God and toward one another. “Nearness to Christ will draw us nearer to each other.” Andrew Murray

“Love must be the distinguishing mark of Christ’s followers. This agape love is basically a self-giving and sacrificial love that seeks the good of another. Thus, the relationship among all believers must be characterized by a devoted concern that sacrificially seeks to promote the highest good of our brothers and sisters in Christ. Christians must befriend each other in trials, be careful of each other’s feelings and reputation, and deny themselves to promote each other’s welfare” (Full Life Study Bible).

Lie #6: Those who deny that Jesus is the Christ, the Son of God.

Who is the liar? It is the man who denies that Jesus is the Christ. Such a man is the antichrist – he denies the Father and the Son. 1 John 2:22

Anyone who believes in the Son of God has this testimony in his heart. Anyone who does not believe God has made him out to be a liar, because he has not believed the testimony God has given about his Son. 1 John 5:10

This lie is born of the belief that all roads eventually lead to Heaven or that there is no eternity at all and Jesus is a myth. This is the number one hang-up for every person who is unsaved. To believe that Jesus is the Christ means that one must also accept the gospel. The very foundation of the church is built upon the understanding of who Jesus is – the Son of the Living God.

In John’s letter he is not trying to teach truth to people who do not know truth. He is writing to remind believers of the truth because he recognized that lies were coming in to steal away their inheritance. We must never abandon or turn away from the foundational truth taught by Christ and His apostles.

We have an anointing from Christ – His Spirit – and therefore we know the truth. We have been given the Holy Spirit to help us know, discern, and understand truth. Others in our lives may be teachers of the Word, but we have no need of anyone to teach us how to know God’s Word. His Spirit is He which guides us into all truth. As we remain in Him, His Spirit will continue to teach us. Error becomes more likely when we turn away from Him and begin to rely more upon man.