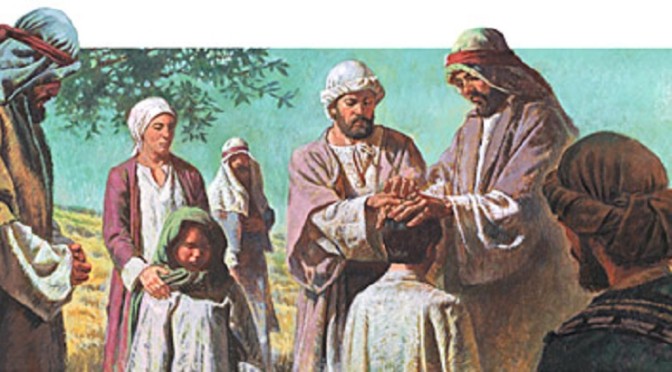 It is so important to maintain connection and accountability in ministry. The moment you step away from ministry covering is the moment you put yourself in a position to fail. The early church was marked with ongoing connection and accountability, with apostolic oversight being provided at all times. Whenever ministry would be taking place in other regions the apostolic base in Jerusalem was both aware of the ministry and available to assist as needed.

Philip had been chosen as one of the seven deacons or overseers to assist the early church in ministry. Philip had been faithful with his service and God had raised him to a new place in Him. A person should not desire to stand before people to speak without being willing to stand beside people to serve. In Acts 8 we find him ministering evangelistically in Samaria and great things were happening.

Acts 8:5 Philip went down to the city of Samaria and proclaimed to them the Christ. 6 And the crowds with one accord paid attention to what was being said by Philip when they heard him and saw the signs that he did. 7 For unclean spirits, crying out with a loud voice, came out of many who had them, and many who were paralyzed or lame were healed. 8 So there was much joy in that city.

People were being saved, healed, delivered, and there was great joy in the city over what God was doing. We would definitely say that Philip was having effective and successful ministry in Samaria. We even find that Simon, a sorcerer, responded to the Gospel and attached himself to Philip (verse 13).

The church in Jerusalem was made aware of what was happening in Samaria and they sent Apostles Peter and John to confirm what Philip was doing and to assist him in ministry. From this account we can see some keys to activating and accepting apostolic oversight, connection, and authority.

14 Now when the apostles at Jerusalem heard that Samaria had received the word of God, they sent to them Peter and John, 15 who came down and prayed for them that they might receive the Holy Spirit, 16 for he had not yet fallen on any of them, but they had only been baptized in the name of the Lord Jesus. 17 Then they laid their hands on them and they received the Holy Spirit. 18 Now when Simon saw that the Spirit was given through the laying on of the apostles’ hands, he offered them money, 19 saying, “Give me this power also, so that anyone on whom I lay my hands may receive the Holy Spirit.” 20 But Peter said to him, “May your silver perish with you, because you thought you could obtain the gift of God with money! 21 You have neither part nor lot in this matter, for your heart is not right before God. 22 Repent, therefore, of this wickedness of yours, and pray to the Lord that, if possible, the intent of your heart may be forgiven you. 23 For I see that you are in the gall of bitterness and in the bond of iniquity.” 24 And Simon answered, “Pray for me to the Lord, that nothing of what you have said may come upon me.”

1. Philip did not become jealous.

Far too many ministers and ministries have become territorial and forgotten just how much we need one another. If one can chase a thousand and two ten-thousand then why would we settle for less than what is available? I get the genuine sense that Philip was thrilled to have Peter and John join him in ministry in Samaria. They were not showing up to show off or show Philip how it was done. It was completely Kingdom motivated.

If I become jealous of what someone else can bring in ministry then I am operating in a foul spirit and not the Holy Spirit. In fact, I am allowing the same spirit to torment me as the one that tormented King Saul when the singers declared him and David’s success. Saul lost sight of the fact that Israel was blessed by the success of more than just him.

When we believe we can do all that needs to be done on our own we are dishonoring God’s plan. Even from the beginning He has declared it is not good for man to be alone. Jesus Himself sent the disciples out to minister as teams. We need accountability and connection to see all God’s best.

Peter and John walked in an anointing that was both different and complimentary to Philip’s. Philip had taken the people as far as he could take them in his calling; Peter and John took them deeper. This was possible because Number One is true. Had Philip become jealous and territorial the people of Samaria would have plateaued at the point of Philip’s anointing.

3. Peter discerned and dealt with what had become familiar to Philip.

Simon the sorcerer continued with Philip and observed with amazement everything that was going on in ministry. From Philip’s perspective Simon was a stable man of God. When Peter encountered him, however, he discerned Simon to be in the bond of iniquity. There are times that familiarity will genuinely breed contempt or the inability to discern what is truly going on in individuals or situations. Had the connection and oversight never been activated it is possible that Simon would have become a true detriment to what was happening in Samaria.

Sometimes the greatest thing that can happen in ministry is a fresh perspective and a fresh anointing to come in and see what you can no longer see. Again, without the absence of jealousy this could not have happened. Philip knew that what was happening was not about his ministry, but was about God’s Kingdom. What Peter was able to discern did not undermine what Philip had done. Instead what Peter discerned undergirded what Philip had done and made it stronger.

It has become a major problem in the modern church for there to be lone rangers in ministry. We can quickly become so self-absorbed and territorial and forget just how beneficial it can be to partner and connect with others in Kingdom service. You and I need one another. What you bring to the table will benefit what I have on the table and vice versa. I do not want to limit God through the danger of isolation. We must maintain connection and accountability. The Kingdom is built by us and not just by you or me. Let us join together to advance God’s Kingdom.