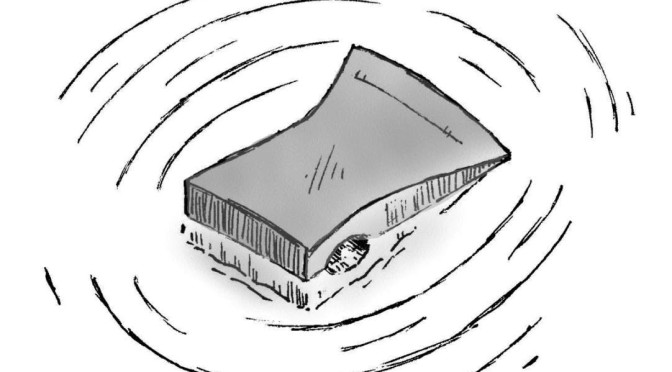 In ministry there are moments when we recognize the need to go further than we are currently and to build and expand to better accommodate what God is doing. In those moments we find ourselves stepping by faith into unchartered territory, needing to ensure that we have the heart of God before we embark on the new journey. Each step of faith in the process is often done with caution and precision. It is imperative that we know God by His presence is accompanying us and that we have not set out on our own.

In those moments when we know that God is both directing and accompanying us we often encounter obstacles, setbacks, and moments along the journey that seek to steal our edge or our sharpness; moments that attempt to stop our effort and service. The key in those times is to stay focused on what we are doing and pay close attention to the circumstances or situations that may try and steal our edge. Consider the account of the floating axe head from 2 Kings 6 to further understand this important principle in ministry.

2 Kings 6:1 And the sons of the prophets said to Elisha, “See now, the place where we dwell with you is too small for us. 2 Please, let us go to the Jordan, and let every man take a beam from there, and let us make there a place where we may dwell.” So he answered, “Go.” 3 Then one said, “Please consent to go with your servants.” And he answered, “I will go.” 4 So he went with them. And when they came to the Jordan, they cut down trees. 5 But as one was cutting down a tree, the iron ax head fell into the water; and he cried out and said, “Alas, master! For it was borrowed.” 6 So the man of God said, “Where did it fall?” And he showed him the place. So he cut off a stick, and threw it in there; and he made the iron float. 7 Therefore he said, “Pick it up for yourself.” So he reached out his hand and took it.

1. The sons of the prophets saw the need for expansion – to go deeper.

The servants of the Lord realized that it was time for growth and expansion. They recognized that they had maxed out their current situation, and to remain stationary was going to be more detrimental than beneficial. They realized they were both spiritually and naturally land-locked and therefore needed to enlarge their tents (see Isaiah 54).

The sons of the prophets recognized that with Elisha (representing God’s presence) with them they were never going to get smaller or less significant. They understood that the presence of God always expands and claims more ground, and they were taking the approach of being proactive so as to prepare for the expansion. They saw the need and were willing to take the steps in advance. The eyes of the prophet will always see what is coming well before it fully arrives, and it will lead him to build and make provision for what may currently be unnecessary.

2. They moved forward under the direction of the Spirit of God.

The sons of the prophets consulted with Elisha about what they saw, and with his blessing they began to move forward. They were unwilling to move forward without the assurance from the Spirit of God that it was the right direction and decision. While the prophet will see what needs to be done, he must be wise enough to not move forward until he has first consulted with God and obtained an understanding of the heart of God for the matter at hand.

3. Elisha, the prophet and the representative of God’s presence, accompanied them in their service.

The greatest desire of the sons of the prophets was that if they were going to move forward in the expansion of their territory it was going to be necessary that Elisha accompany them. They were unwilling to move ahead in the matter without the presence of Elisha. I liken this to when Moses informed God that unless He went with them into the land of promise the Israelites were unwilling to go. Even if you know the direction to go, and you know it is God’s heart for you to go that direction, it would be foolish to move forward if His presence does not go with you.

4. As they were being faithful, one lost his edge.

The sons of the prophets did not just set out to expand and then watch as the work was done. They walked and served faithfully. Just because you can see what needs done and you have God with you does not mean that your work is done. It takes effort and hard work to accomplish the plan of God. And that work is always going to be met by resistance and opposition.

This move forward required much cutting and removing of what was currently in place and it took its toll on the edge of one servant. As he was wielding his axe he encountered enough resistance to cause him to completely lose his edge and his sharpness. He quite literally lost his ability to do the work. We like to think that once we set out to do what God has called us to do that everything will simply fall into place. This servant, however, found out this is not always the case.

For many of you reading this you can picture or remember a time when you hit against something that did not want to be cut away and you felt as though you lost your edge and your effectiveness. Some of you are perhaps even there now. It may not involve a cutting down of a tree, but the principle is still applicable. These men were clearly walking in the direction of the Lord and they were accompanied by His presence. Nonetheless, the resistance was strong enough to steal the edge of at least one.

I interact with ministers all the time who have lost their edge. They hit against tradition within the ranks of where they are trying to expand what God is doing; they find themselves being verbally attacked, being spiritually resisted, or in some cases even being physically threatened. In those moments it is easy to lose your edge of effectiveness and wonder if you are even doing what you are supposed to do.

5. Elisha challenges the man to go to the place where his edge was lost.

When the servant who lost his edge cried out to Elisha he was told to go back to the place where his edge was lost. Elisha did not tell him to simply get a new edge, to change his course of action, or to give up altogether. He told him to get his edge back by going back to where he lost it.

For some of you reading these words the Lord would tell you the same thing Elisha told this servant – go back to where your edge was lost and reclaim it. In the height of the days of revival in the mid to late 90’s we often sang “Enemies Camp,” declaring that we went to the enemy’s camp and took back what he stole. This is the word the servant was given. We must not allow circumstances, situations, or resistance to steal our edge and render us impotent or ineffective. We have the authority to go back to the place where the edge was lost and to reclaim it.

For some of you that is going to involve reliving some painful moments and releasing them unto the Lord. For some it may involve confronting something you hoped would forever lie dormant. For some it is going to require you to face head on the same fear, insecurity, and rejection that always seems to steal your edge. You are going to have to go back to where the edge was lost, point it out clearly to God, and allow Him to do miraculous work of restoring your edge.

6. Elisha restored the edge back to the servant and the work was able to continue.

The edge resurfaced. The servant had declared the edge was borrowed; he understood that it was not his but that he was responsible for its care. The edge that you and I carry is the anointing of and gift of God that He has entrusted to our care. God is not honored when we allow people or circumstances to dull or destroy the edge that has been given to us by Him.

I have personally began to realize that there will be people in my life who are hungry for the things of God that He has entrusted to me, and He desires that I be sharp and able to freely give to those what He has freely given to me. At the same time there will be people in my life who desire to dull or remove the edge or sharpness of what God has entrusted to me, but I must not allow them to steal away what He has given to me.

As servants of God we must stay sharp and continue to cut away the obstacles and the things in place that would prevent the expansion of His Kingdom. We cannot allow those things that resist the expansion to cause us to lose our edge. We must not back away or stop the pursuit of God’s best for anyone or anything. If you have lost your edge, go back to where it was lost and get it back and resume the work. If the Lord is on your side and directing the steps you are taking then He will restore your edge back to you and enable you to finish that which you have been commissioned to do. Do not shrink back or be discouraged. Stay sharp and stay on point. Keep your edge and keep cutting away the resistance. The Kingdom of God is being advanced with the help of your sharpness, so do not let it go.