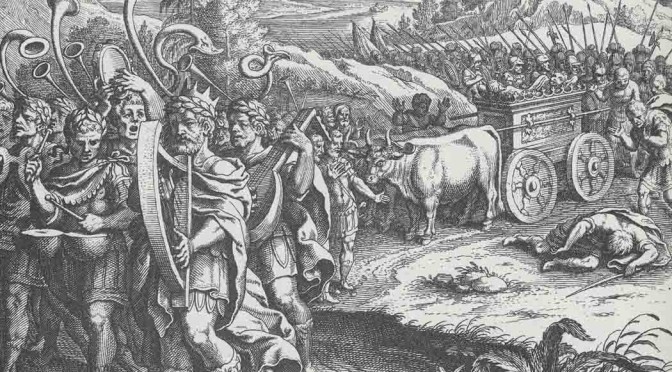 Recently I sensed the Lord speak to me about many in ministry who have first-hand knowledge about the cost of a move of God and that knowledge now serves as a barrier to them experiencing a move of God in their lives today.

As David was attempting to move the Ark of the Covenant back to Jerusalem, those who were carrying the Ark encountered a bump in the road. Uzzah reached out his hand to steady the ark so that it would not fall from the cart. What he did seemed like the logical, sensible, and even right thing to do. He was not, however, honoring God’s presence, but was choosing to approach Him in the wrong manner. Immediately God struck him dead.

The judgment came quickly in response to the irreverent approach of Uzzah. Perhaps he acted in a manner God called irreverent because he took God’s presence for granted. Uzzah was the son of Abinadab, at whose house the Ark was dwelling at the time David retrieved it. Uzzah likely lived in the house where the Ark was dwelling, but there was still an unfamiliarity or irreverence involving exactly what the Ark represented. David and those with him were celebrating the move of God without understanding the seriousness of or the guidelines that are expected to facilitate the move.

It was never God’s intent for the Ark of the Covenant to be transported in any other fashion. During their forty year journey in the wilderness, it was the responsibility of the Levitical priests to transport the Ark. When God brought the children of Israel to the Jordan in Joshua 3, it was the Levites who first stepped into the Jordan carrying the Ark, after which the rest of the Israelites crossed the Jordan River on dry ground. God’s instruction demanded that the Ark of His presence be handled in the right manner. The only time we read of a different method of moving the Ark was when it had been captured by the Philistines and they sent the Ark back to Israel on a cart pulled by two cows.

God is specific in how He desires to be honored. Following three months of the Ark being stationary at the home of Obed Edom, David decided to return and finish the move he had started. This time, however, he went about things in God’s prescribed manner. We find that when those who bore the ark of the Lord had gone six steps, he sacrificed an ox and a fattened animal. This was much different from before when the Ark was placed on a cart to be pulled by animals. Now the Ark was being borne by people.

When David brought the Ark successfully to Jerusalem he did so in the prescribed manner, with it being transported on the shoulders of men. Along the way they offered sacrifices, offerings to the Lord, and they celebrated Him through worship. The first time around they acted with excitement and zeal; the second they operated in reverence and honor. As a result, God’s presence was brought back to the His people and given a place of prominence in their lives.

And David called for Zadok and Abiathar the priests, and for the Levites, for Uriel, Asaiah, and Joel, Shemaiah, and Eliel, and Amminadab, and said unto them, “Ye are the chief of the fathers of the Levites: sanctify yourselves, both ye and your brethren, they ye may bring up the ark of the Lord God of Israel unto the place that I have prepared for it. For because ye did it not at the first, the Lord our God made a breach upon us, for that we sought him not after the due order.” 1 Chronicles 15:11-13

Consider those who were tasked with moving the Ark and what their names mean and represent.
Zadok = just or righteous
Abiathar = the Great One is Father or father of abundance
Uriel = flame of God
Asaiah = made by Jehovah
Joel = the Lord is God
Shemaiah = heard by Jehovah
Eliel = my God is God
Amminadab = my kinsman is noble

Those who were given the responsibility to handle the move of God’s presence were those who represented God’s character and power. The Philistines were not judged for moving the Ark on a cart, because they did not represent the God of the Ark. The people of God, however, must properly represent Him if they hope to see His presence move in their lives and on their behalf.

God’s presence must be handled differently when moving than when stationary, because everything is different when the presence of God is moving. Uzzah was familiar with the stationary ark as it was at the home of his father Amminadab. When the ark was moving, however, he reached out to steady it and handle it as had likely done before. He was struck down by God.

Many people cry out to God for a move of His presence, but I am not sure how many truly count the cost or fully understand what it is going to take to handle a move of His presence. We must understand Him and the manner in which He has outlined being handled and approached. We cannot assume to know, we must be confident in our understanding. To approach God’s presence from our own understanding is extremely difficult and dangerous to us and to those who are with us.